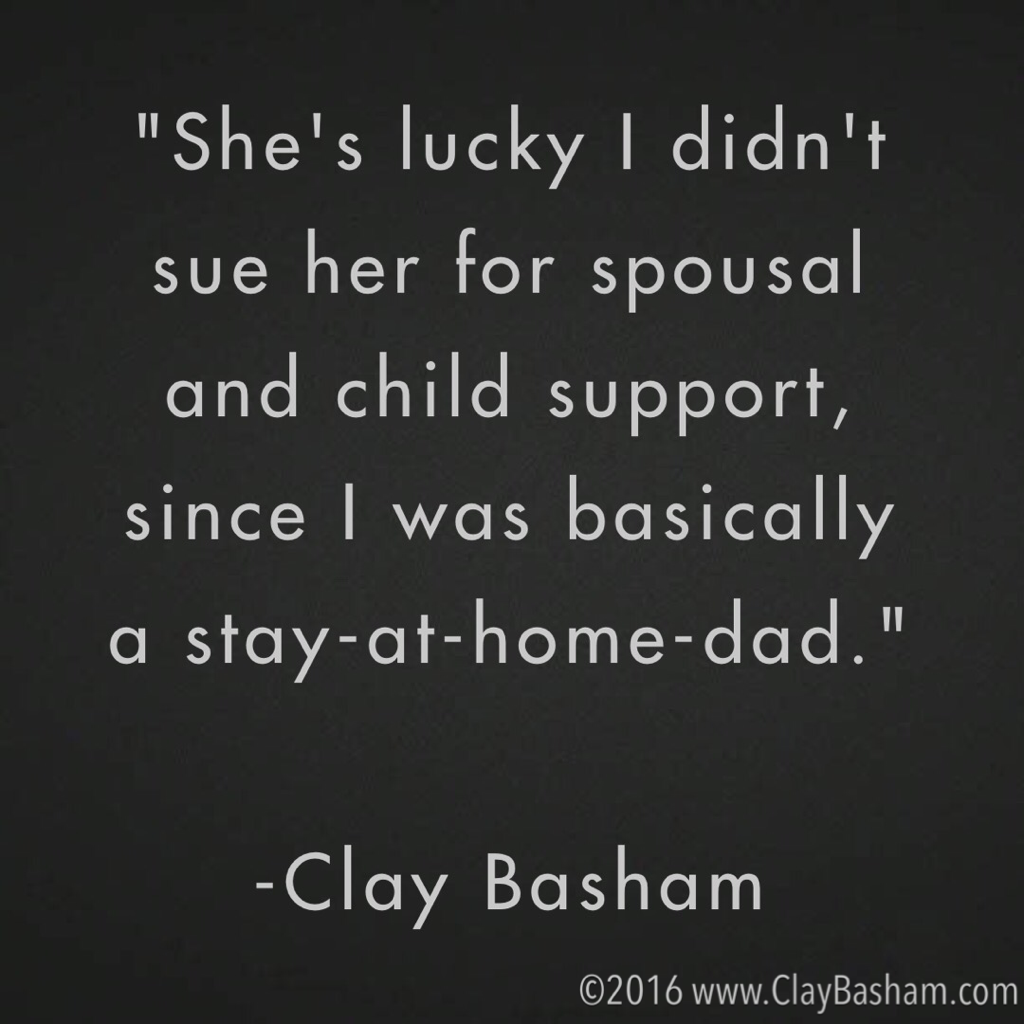 I made it clear to Clay that I was only interested in an “old fashioned” relationship where the man takes care of a woman. He agreed, however, his actions were quite the opposite. He warned me that he didn’t have a career that will make him rich, and I told him that wasn’t important to me. I realize this lifestyle is old school, but that’s my personal preference, and that’s why I make it clear in the beginning.

When Clay told me that he was a stay-at-home-dad at the time he left his ex wife, I latched onto the part where he said that he “could have sued her for spousal and child support, but didn’t”, thinking it was great that he wasn’t malicious. I was smitten and bypassed the part where he told me that he was, and I quote, “basically a stay-at-home-dad” and only made some cash coaching basketball. He left me other breadcrumbs (the size of loaves) that I ignored as well.  Like, when he told me that he had systematically purchased furniture and household items before he left his marriage so that he would be able to make a clean break. I should have asked more questions like, “why weren’t you working?” “why was she the one supporting the whole family?” “was it her money that was paying for your furniture to bail?” and “if you were spending so much money on buying stuff and moving out, what, if anything, did you contribute to the household financially?” So many unanswered questions!

I’m not saying it’s wrong to be a stay-at-home-dad. It works for a lot of families. It’s just not a family dynamic that I desire. Manliness, for me, has a lot to do with providing. I like a man that shows dominance and confidence with follow through, not with feathers and a dance. A man that shows his family he loves them by taking care of them and spending time with them, not by empty promises and neglect. If a man cannot be a man, in the historical sense, he just doesn’t “do it” for me. It was my understanding, through his fowl dance, that he merely hit a rough patch and was working to get back on top. I thought he was a “good guy”, so I conceded, for the time being. I was confident things would improve, since I was clear about my expectations and he had agreed.

You may consider me a Gold-Digger, but I don’t need riches. I rarely shop for myself, and when I do, It’s usually at Savers (the thrift shop superstore). You can ask one of my BFF’s. She’s usually with me on those rare occasions. Oh! And when we go, it’s on 50% off days, so no, I’m by no means a Gold-Digger. Plus, my dream home is a vintage Airstream… 😺

Although I don’t know a lot about Clay’s marriage beyond his self admitted claims that resemble sponging, I’d have to say that his ex-wife is a saint. She has worked so hard as the main provider for their children and they have turned out amazing. It’s not easy being the one filling in all of the blanks (pun intended-more on that later). 😉

4 thought on “Stay at Home Dad”