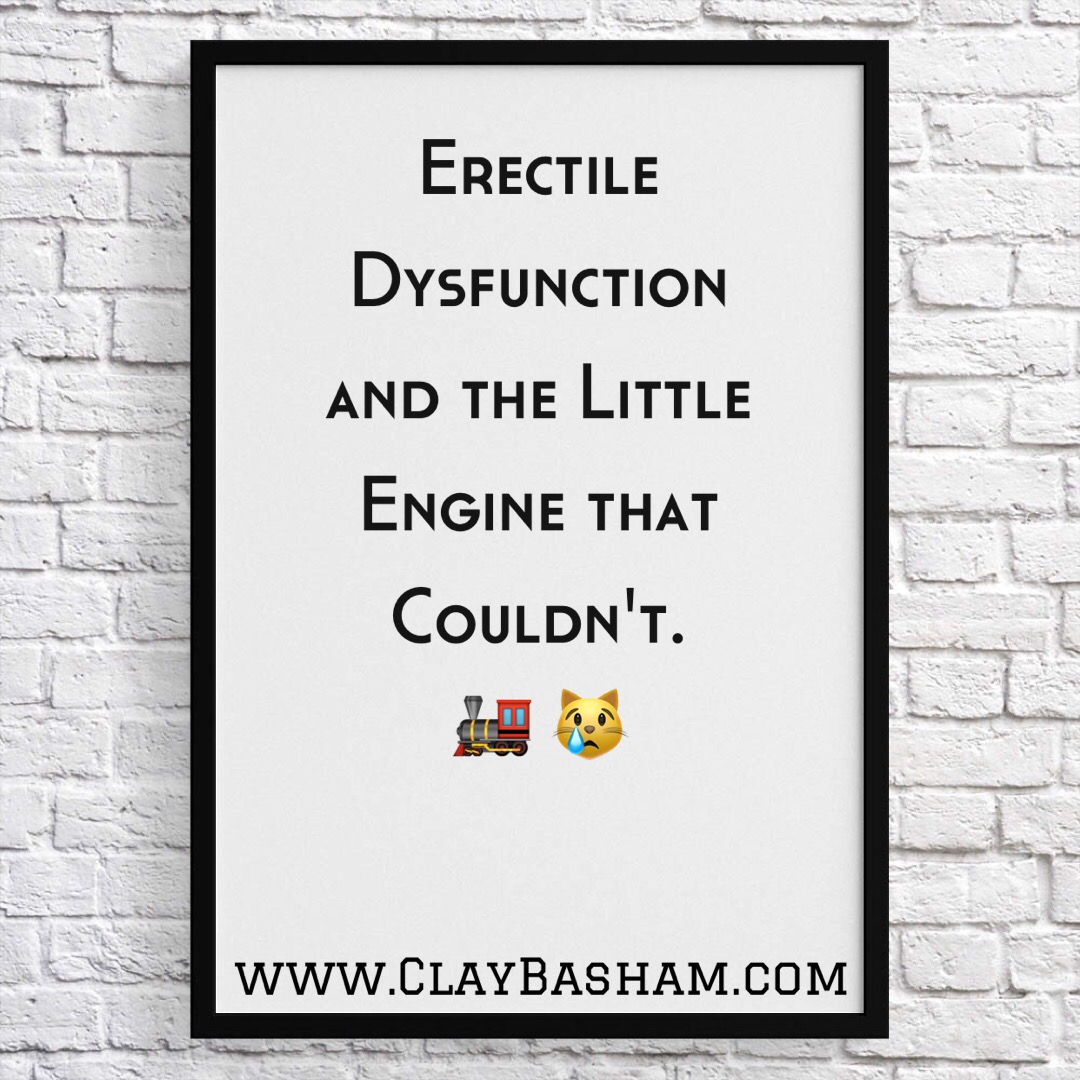 When it comes to erectile dysfunction, a lot of people don’t think of the effects it has on the women.  I’m not a physician, but for the sake of simplicity, I call Michael “Clay” Basham’s inability to control, maintain, or get an erection, as “erectile dysfunction”.  Because, for all intents and purposes, his penis is/was dysfunctional. The flaccid nature of it only accentuated how freakishly small it is. I don’t think I ever saw it exceed 4 1/2″. Odd for a man that’s 6’9″.   And disappointing for a woman who’s previous relationship was a solid 8″ wielded by an expert.  But, like the last post stated, it was time to grow up…

If I tried to talk about his inability to get/maintain an erection, Clay would quickly snap at me saying things like, “you’re giving me a complex!” Or, “you’re making it worse!” I mentioned that I was starting to feel inadequate.  But, he just snapped at me again, and said it wasn’t me. I was clearly not allowed to mention it.  I thought it was important that we discussed it, since we were going to be “together forever”.  Sometimes, after days of trying to get his limp penis to finish, he’d briefly say that he needed to see a doctor to “fix his broken peepee”.  Since he didn’t have health insurance while we were together, that never happened.  Caring too much for his fragile ego, I stopped mentioning it altogether.

As I’ve said before, I’m the mother of an athlete and am a full-time student, so I (along with most adults) can’t stay in bed for days at a time.  Sex, is one of the most amazing things ever. Personally, my greatest pleasure is the climax of my partner. His finish, is my reward. But with Clay, it was like playing a six-deck game of War between two people. Aaaaaaaand just about as riveting.

Clay would remark on how great it was that we could spend hours on end talking, cuddling, and having sex intermittently.  Over and over and over again.  I thought it was more likely because he was unable to finish and was glad he had a chump like me that would stay for the long haul, and help him out.  After months of this, I had to place a time limit. I’d tell him I had an hour before I had to start my homework, or whatever.  All I knew, was that I wasn’t going to pull another 3-day quest to nowhere, while life passed me by.  That’s right!  3 days straight happened.  The longest bout of time was 2 weeks to get him done.  Sure, there were homework and parenting reprieves, but 2 weeks with hours and hours each day.  It’s hard not too admire his tenacity, while he’d hunch slightly, with his thumb and forefinger stroking that little thing, quick like a rabbit, while I worked his nipples till they bled.  But, seriously, If I hear “just a couple more minutes, I’m so close” again, I think I will lose it.  “Close” is apparently a very relative term.

Towards the end of that 2 week stint, Clay bought me flowers for the very first time. Actually, that was the one and only time he ever bought me a gift.  I was very thankful, although I had figured it was because he sensed my pulling away.  He had even called my daughter to ask her what my favorite flowers were. She told him gardenias, or daisies. So, he got me roses from Costco. After the flowers, he finally finished, and immediately pulled one of his disappearing acts. I remember tossing the roses in the trash while they were still fresh.

Michael “Clay” Basham would frequently ask me to look in his eyes while having sex.  Since the very first time he said that to me, I figured he must have caught a girl rolling her eyes amidst their tryst.  So, I would try to look into his eyes while playing Wack-a-mole with his nipples using my mouth and fingers.  I wanted him to feel like a king, where he must have felt like a eunuch.  I am a trained actress, and I really wanted to give him the confidence to turn this all around.  Clay would tell me over and over, “I love how you make me feel like a man.” In my head I’d say, “well you don’t make it easy!” Besides, I learned how to roll my eyes with my eyes closed when I lost my virginity.

One would assume that Clay would spend his limp time on me, but that was not the case. He seemed oblivious of the fact that he was limp and go to town like he had the rock hard penis of a giant. Since he was essentially repeatedly crotch punching me with his pelvis, I was very swollen down there at all times. That is, until after he came back from disappearing for a couple of weeks. He remarked on how little things were down there. WELL, DUH!!! I was astounded that he could go through all the motions of sex, as though everything was normal, when his little limp penis would barely pass the labia.

Clay, was my little engine that couldn’t. But, I wanted to turn that around. He was supposed to be the “nice guy” and I was falling in love with him, and he with me (or so he said). So, I worked to turn things around. He couldn’t push rope forever. Or, could he?

See you next Tuesday for the next segment of this series!

One thought on “Dysfunction”