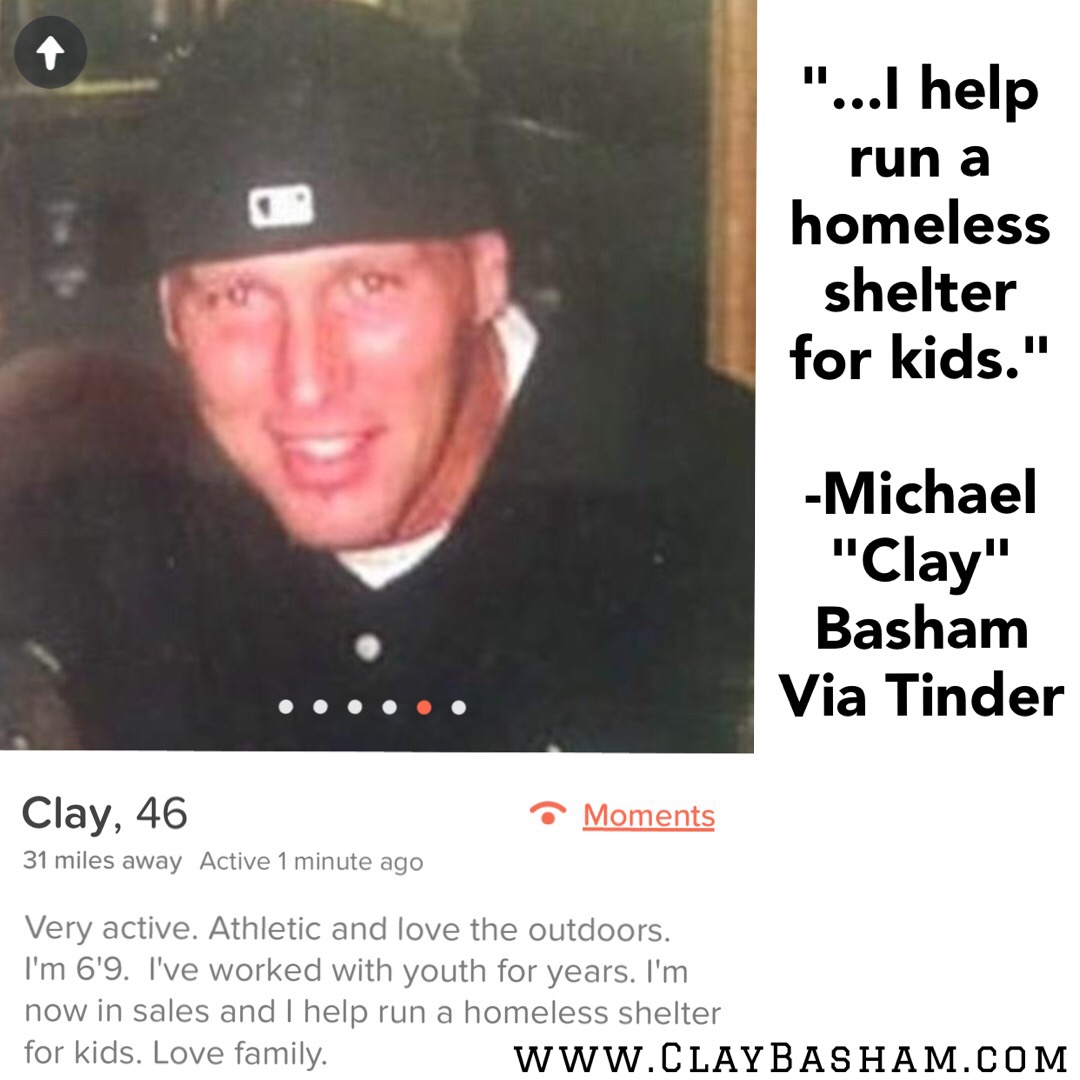 Facts from the Discarding Phase:

Michael “Clay” Basham lied to me and told me he was working with juvenile youth when we first met in addition to working as a bug sprayer. When he called me at the beginning of us dating, saying he was about to cry, my heart bled for him. He told me that the people that fixed his car when he was living in Chicago, Illinois took a payment out of his account before they were supposed to. Consequently, it over drew his account. Thinking he had a two jobs, and was doing great things for the community, I lent him $800.00 to float him for the weekend while he figured things out with the mechanics.

Over a week went by, and Michael “Clay” Basham hadn’t mentioned a thing. So, I asked about it. He told me that the withdrawal was indeed the company that fixed his car and that he couldn’t do anything about it, but he would pay me back. This was just the beginning of what turned into a borrowing spree, that despite my increasing stress over rapidly running out of money, he mercilessly borrowed more and more. He would give me sob stories as to why he needed more and more money, usually relating to his car or his children.

I finally learned that Clay wasn’t actually working with juvenile youth, but merely a part time bug sprayer. At this point, we were falling in love, so the fact that he said that he used to and was looking for a new one, was good enough for me. Soon thereafter, he was in between residences and needed to stay with me for what was supposed to be only one week. Right after he loaded my house with his belongings, he informed me that he had quit his job, because “it wasn’t worth it to drive all the way to Mesa”. I couldn’t believe that he would move into my home, not having any money and not having another job. But, it was too late.

He had moved in Sept 30, and one week tuned into a few. Don’t get me wrong, I was all about Team Basham. I was caught in his web, and didn’t want him to go anywhere. When his truck broke down, I was there to help him and paid for it to get repaired. But, alas, he did move out and eventually started working at Costco as a seasonal employee. This is where the idealization phase turned to the Devaluation Phase. It was right around Halloween.

By this point, he was indebted to me thousands of dollars, and we had only been dating for a couple of months. We were already talking about the future. and he had told me that he was going to “love me forever,” so I figured we had become a team. I was paying for everything including all meals. Even when he had moved out, he was at my house most of the time where I fed him, making his breakfast, lunches for work and dinner. We had discussed that when he was on his feet, he would take on the expenses since I was quickly running out of money.

Once he had a place to retreat to, he slowly started disappearing for days at a time in the manner of my post about the Devaluation Phase. Then, around January, I was broke, and Michael “Clay” Basham still hadn’t attempted to pay me back. He kept promising, but nothing. Finally, we made a payment plan, but he’d frequently miss the payments leaving me, my daughter and my bills, high and dry.

When I ran out of money, and he finally started working with juvenile youth again, the discard phase was in full force. He would say he was coming over, then disappear for days, not responding to my calls or texts. Our relationship finally ended in the middle of March, when I caught him online dating again, even though he was still sleeping with me. The last payment I received, was April 29th, 2016, with a hefty balance remaining. I assume he stopped paying me because he remarried. He always did have an excuse why he couldn’t pay. Now, I will have to rely on the legal system…

PS See you next Tuesday!