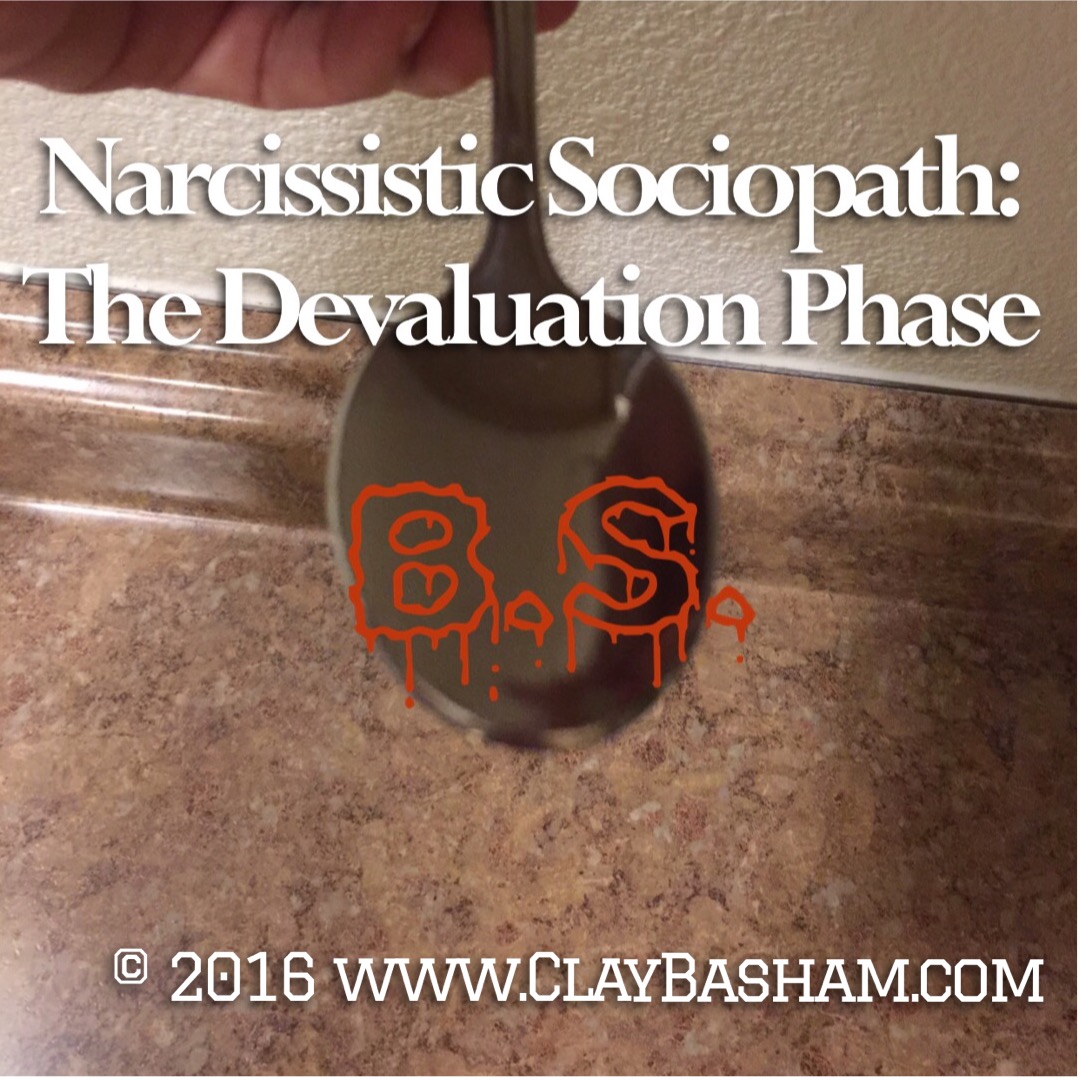 Facts from the Devaluation Phase:

The Devaluation Phase of a relationship with a narcissistic sociopath is confusing and heart wrenching at best. It’s where your healthy dose of love and affection gets ripped away from you, then dangled like a carrot in effort to mold your reactions and emotions to suit his desires. I was perfect when I….

…when I didn’t point out the inconsistencies in Michael “Clay” Basham’s statements.  But, there were SO MANY!!!  If I ever questioned something, he always had the perfect answer.  An answer without an actual answer, that is. His answers always had holes and were vague.  Like when I’d ask where he played professional basketball. He said Turkey and a couple of other countries without mentioning specific teams, then quickly change the subject.  If I’d probe more on something that was left unclear, he’d blow it off, change the subject, get irritated and later, he’d usually disappear for days and sometimes weeks.  I’ll have a whole post on the inconsistencies, so we’ll get back to the specifics on those later.

…If I played the perfect part sexually.  Silk thigh-high stockings, closed toed high heel platforms, garter belt, and red lipstick.  Once, I said, “I’d F–k me” in my best Buffalo Bill impersonation when he had red lipstick all over his mouth.  He wasn’t amused.  But, digress.  My point is, if I wasn’t wearing exactly what he wanted, he wasn’t interested.  I’d know I screwed up by his look of utter disgust or by being totally discarded.  I wore fishnets once…he made it very clear that they did absolutely nothing for him.  Even though I LOVE them, he didn’t care. I tried to explain to him that sometimes I want to do things that make ME feel good. He disappeared for a while after that.  Open toed platform heels?  HELL NO!!!  CLOSED TOED ONLY!!!  He’d make a face like a toddler being spoon fed liver.  I dressed up like a school girl once….once.  That was awkward.  Basically, Liver-Face was look that he always had when his adolescent brain wasn’t getting exactly what he wanted.  Never regarding what I wanted.

…If I got dressed in a manner he could tolerate. I have these tank tops that are super stretchy and hold their form.  I put them on feet first to mitigate deodorant carnage.  One day, he casually mentioned to someone in front of me, that he hated it when women get dressed like that.  I ignored it. Soon thereafter, he brought it up to me directly saying that he hates it when “those people” do that.  So, I said, “I do that.”
“I know! I hate that!”  He shouted back to me.  So, to match his wits, and made sure that I was in front of him whenever I put those tank tops on.

…When I had what he wanted to eat and drink.  Now, we’re back to that toddler Liver-Face I was talking about.  That’s how Michael “Clay” Basham gets his way.  Mr. Garden Hose budget with caviar taste had particular foods and drinks that he wanted.  If they I didn’t have them, he’d make the face.  And you have to understand, it’s not just an every day “ew-gross” face, it’s a look of utter disgust.  It’s a look that a woman never wants to see from the man that she loves.  I wanted to please him, and the little pride I had left, never wanted to see him look at me that way again.

…When I would SHUT the F–k up. If I had the AUDACITY to tell Michael “Clay” Basham that his action or words hurt my feelings, he’d tell me with everything I wanted to hear in order to get out of the conversation, then disappear.  He wouldn’t respond to my texts, show up when he was supposed to, or anything.  Gone! For days or weeks. Totally incapable of manning up to what he’s done wrong or hurting someone’s feeling.  Unless, there’s more he wants from them.

The most epic example of this was on Thanksgiving.  Weeks prior, we discussed spending Thanksgiving together aside from the “couple hours” he was going to spend with his kids.  Then, we’d have a Thanksgiving dinner, together with both of our kids, the day after.  On Thanksgiving morning, Clay texted saying hello around 8am, he called again around 4pm, but I was speaking to my parents.  I called him back, but he couldn’t get around to responding until around 6pm.  I was so upset. He hadn’t been returning my texts and I was expecting him to come home.  He gave me some BS excuse saying that he had broken a rib that morning playing football with the kids, and now his ex wife needed to go to the hospital, and he was going to have the kids for the night. I was so upset that he ignored me all day, I lost it.  He told me he couldn’t believe I was mad about him spending time with his kids.  WTF?!?!?  It had nothing to do with him spending time with his kids.  That was awesome, since he barely ever did. It was the fact that we were supposed to spend the day together and he didn’t have the decency to communicate to me otherwise.  I didn’t have to spend the holiday waiting around for his punk ass.  So, what did he do to repair right his wrong?  Ignored me.

He wouldn’t return my texts, nor my calls.  I was making Thanksgiving dinner for Clay, his kids, my daughter and myself, ALL DAY.  When it looked like he wasn’t gong to show, my daughter even texted him (without me knowing).  She asked if he was coming, and if he didn’t that it would be messed up since I had been cooking all day.  Nothing. It was nice to have her there for me when I finally realized he wasn’t coming, broke horn and cried.  He literally ruined EVERY holiday between October 2015 and March 2016.

So, as far as the Devaluation Phase of our relationship went, he was around when he wanted something and gone when he didn’t.  To be clear, it’s not the rejection that I upsets me.  I’ve been rejected plenty of times, and I have done the rejecting.  It’s part of finding the right person for you.  The problem is the sociopathic method in which he would USE me to get what he wanted and treat me like crap when he didn’t need anything.  Then, to add insult to injury, he’d say just enough to keep me around. Just in case he needed something.  With little else to take, we graduated to the Discarding Phase of the Narcissistic Sociopathic Relationship.

PS To those who keep asking for more, I decided to post on Tuesdays.  It seems so fitting, when speaking of Clay, to say “See you next Tuesday!”